according to alchemical principles,

“a human being can not only, but must, be born again and led back into the ‘prima materia'”

there are two aspects of alchemy. one is the study of stones or precious metals. ‘Arabian Moors’ taught europeans in the middle ages about the spiritual powers of alchemy, but this aspect has been omitted in history for, ironically, melanin related reasons. alchemy became known as the mystical process of turning lead into gold,  which, to the moors, was a secondary process. the original process involved turning the base metals inside you to gold. that gold represented your crown chakra, your aura, and all the metals inside you. this is called the illumination of (melanin) metals.

Principle One: Explore the biochemistry of melanin, then correspond to elements within the mineral kingdom.

As stated in Part One, the key biocrystalline molecule present in the human body is melanin. Melanin is a: 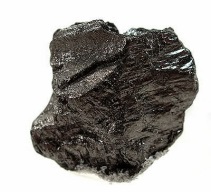 -A Super-conductor of the high frequency radiation and neural transmissions.

-A semiconductor of sound and heat energy.

-A Conductor of the body’s ionic charge

-A resonator of visible light

Beyond carbon, there are two other elements that are important to the structure of melanin: copper and sulfur.

is incorporated into the melanin molecule through the amino compound cysteine. Cysteine is an amino compound that is organized around sulfur, nitrogen, and carbon. This amino acid facilitates melanin’s heat and energy transference. In other words, it allows melanin to create or release heat as is needed for the body. cysteine also cleanses and purifies melanin by ‘burning off’ toxic elements that have been absorbed within melanin.

The biochemistry of melanin indicates that there are at least three important elements necessary for maintenance of healthy melanin – Carbon, Copper, and Sulfur. Stones that contain these elements may be used as tools for harmonizing and refining how these elements are incorporated and maintained within melanin.

Sulfur based stones tend to cleanse and purify melanin. These stones also facilitate melanin’s ability to transform heat into physical energy and visa versa. Sulfur based stones include: Cobaltite, Gypsum, Lazurite (Lapis Lazuli), Marcasite, Pyrite, Sulfur Details of some of the more powerful of these stones are explored in Psycho-Spiritual Healing.

Skin melanin, perspiration, and certain metals create energy which melanin then converts into metabolic energy for the body.

In other words, when electrolytes within sweat come into contact with metals adorned as jewelry, ionic exchange occurs. Melanin absorbs the ions exchanged in the process and turns it into food for the body. Details of some common metals worn as jewelry are as follows:

Gold is an elemental metal which is very electrifying. It provides a catalytic, positive charge to the body when interacting with melanin, sweat, and sunlight.

Silver is an elemental metal which is magnetic in polarity. Worn with gold or copper, an electromagnetic polarity is established. The result is a low-voltage current conducted through skin melanin. The melanin may then transform this energy into nourishment for the body.

Copper has basically the same electromagnetic qualities as gold, but has the extra benefit of being in resonant affinity with copper-based melanin. Wearing copper jewelry feeds and nourishes melanin with one of its central compounds.

Hematite is a stable, metallic compound of iron and oxygen. Hematite means “blood stone,” and recognizing that iron and oxygen are the two component elements in blood, it is clear how hematite received its name. When interacting with melanin, sweat, and sunlight, hematite catalyzes the assimilation of iron and oxygen into the blood, thus strengthening the entire physical system.

is a metallic compound which means “Fire stone.” It is an iron-sulfite. As stated, iron is a central element of blood. Sulfur is the central element in the amino compound cysteine, a biopolymer component of melanin. When pyrite interacts with melanin, sweat, and sunlight, it electrifies and energizes both blood and melanin.Pyrite in turn cleanses melanin and fortifies blood.

Striated stones have the potential to channel energy into the near-melanin structures of deep within the central nervous system.

These stones are excellent for ‘grooving’ healing energies into the neural-melanin that lay deep within central nervous system. Used regularly, striated stones strengthen the nervous system so that it can conduct higher and more intense neural frequencies for longer duration without showing signs of stress.

Moreover, what we know as ESP (Extra-Sensory Perception) is actually LSP (Latent Sensory Perception). Latent means dormant or unawake. Everybody has the potential to sense unseen realities, but the skill has to be awakened. Being able to tune into unseen energies involves activating and awakening mind-powers that are centered in melanin plexus structures located throughout the spinal column. Down the length of the spinal column are ganglia of nerves, also known as nerve plexus centers. These nerve structures are highly melanated neural networks that assist the brain in coordination of the physical body. Striated stones, because of the highly focused, intense energy they emit, are the perfect tools to activate these melanin plexus centers in the central nervous system.

Specific striated stones are as follows:

Tourmaline manifests in a variety of colors, the most common being black, green, red, and watermelon (green, red, and clear). Tourmaline has pyro-electric potential, and discharges ionic charges when exposed to heat or flame. 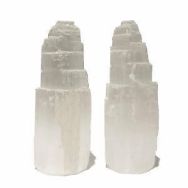 Selenite is a fragile stone in the gypsum family. The clarity of striated selenite is the most spectacular of the mineral nation; its ability to reflect and refract light even exceeds clear quartz crystal. Selenite has affinity with the element selenium, which is a vital component of the pineal gland. Excellent for balancing mind functions related to that gland.

A sky blue stone with pale white streaks, kyanite is one of the most highly charged stones in the striated family. The blue energy is cooling and calming to the body, yet the high-energy nature of the stone is invigorating. Holding kyanite or laying it on the body is good way to relax and recharge. Or, one can use the stone as a wand to direct energy into a specific body area. 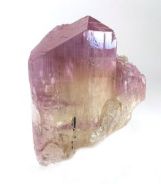 A soft pink, translucent, striated stone, Kunzite is made for ushering the pink ray of self-love and self-forgiveness into the most hardened heart.

Topaz can channel a strong beam of light from the crown of the head throughout the entire spinal column. The color of the light depends on the color of the topaz used. The most common colors of topaz are gold and blue. 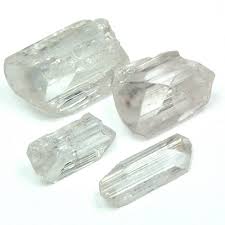 A highly translucent stone that also has complex terminations in conjunction with striations, Danburite is similar to Selenite in that it channels radiant light deep into the spinal column.

Recall from Akoben that melanin is a:

-A semi-conductor of sound and heat energy.

-Conductor of the body’s ionic charge

-A resonator of visible light

Clear Quartz crystal is a:

-A semi-conductor of power frequencies

-A resonator of all forms of radio waves.

The synergistic application of melanin and quartz crystal is the foundation for a spiritual technology for the new millennium. Combining these two multi-spectrum conductors is the way for people of color to harmonize and harness the full spectrum of vibrations within creation.

interactions with peers online and in travel have inspired a constant exploration of the undeniable role that the infamous internet plays in our conceptions of culture.
behind the guise of an onscreen alias, support can be found for every niche, every persona, every fetish, every hobby. there is a burning, natural, desire to impress one’s best self upon others- to make outward appearances live up to culturally assigned ideals of perfection. that obsession with acceptance existed long before the internet and will long after. the field of anthropology comes with an ethical responsibility to remain conscious as an observer of the ‘other’. historically, this study has been highly based on field work, cultural immersion, and participant observation.

the internet provides a fly-on-the-wall, virtual pov, with access to information unlike anything ever before.

if you remain open, there will never be a shortage of ways to learn how the universe is comprised of endless reflections and reincarnations of the same matter. your perception of reality is 1 of 1. understand this, and assimilate organically anywhere in the cosmos.